The Staunton-Augusta County First Aid & Rescue Squad submitted Stephen W. Rohr (Steve) for VAVRS District 1 Life Membership.  Steve joined the squad in 1970 at 16 years old, became a senior member in 1975, received his life membership in 1987 and was honored in 2018 with 45 years of active service.  He became very active with VAVRS in the early 1980’s.

In 1984 Steve became an EVOC instructor.  Since that time he has taught classes across the Commonwealth with a concentration within District 1.  He has made distinguished contributions to the EVOC program and the safety of our providers.  He has taught many classes, set up EVOC courses for District meet competitions and judged the competitions.  Above all, he is very proud to compete in EVOC and has won 1st place at the State convention several years in a row.

Another passion of Steve’s is Vehicle Extrication.  He has been involved with Vehicle Rescue Awareness and Operations for many, many years.  He became a part of the Vehicle Extrication team and would compete in many competitions at the State level and District level. The Vehicle Extrication team accomplished 1st place at the VAVRS State convention 3 times, with the leadership of Steve as Captain of the team.   When is wasn’t competing he was judging for the competition.  In 2013 he became an instructor in Vehicle Rescue Awareness and Operations.

Steve has held many positions with VAVRS and SARS.  These positions include Sargent of Arms at the VAVRS BOG meetings and judging at the District meets and VAVRS state conventions.  He has served as Training Officer, Lieutenant, Maintenance office and the current Rescue Chief for Staunton-Augusta County Rescue Squad.  Steve has become very active with the juniors.  He is junior advisor at the squad.  He attends all VAJVRS meetings with the juniors.  Encourages the juniors to compete and be involved.  He has developed young juniors to become President and other leadership roles in the VAJVRS.

Steve has always supported the goals of VAVRS by promoting and assisting providers in improving pre-hospital care in Virginia through education and training.  Being an educator for VAVRS is also being a liaison between agencies.  He has the ability to communicate and network with other organizations and agencies by keeping all informed of the importance of VAVRS, training and volunteerism.  Safety is Steve’s number one priority whether teaching, mentoring or in his daily EMS activities.  Not only does he make sure that during class everyone is safe but he teaches how important safety is.  He has very high expectations of the providers and instructors in providing for a safe environment.

There is never a VAVRS State Convention that Steve doesn’t attend.  He attends Convention to update his CE’s with the classes taught, he has competed in EVOC and Vehicle Extrication.  He attends the BOG meetings and the Junior meetings.  He not only attends the State meetings but is very involved at the District 1 meetings as well.  He attends the district meets by being involved with the meetings, competing and judging.  When our BOG representative is not available, Steve substitutes as BOG.

Congratulation to Steve Rohr in receiving VAVRS District 1 Life Membership.  He goes above and beyond in his call of duty. Steve has had a continuous service and dedication to District 1.  He has been committed and loyal to District 1 and VAVRS as a whole.  Not only is he the liaison between agencies and the district but a great role model and an example of commitment, dedication and a loyal member. 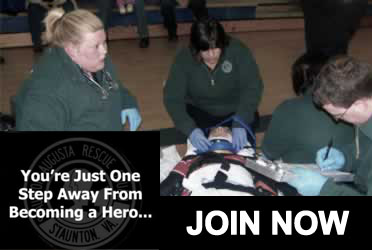